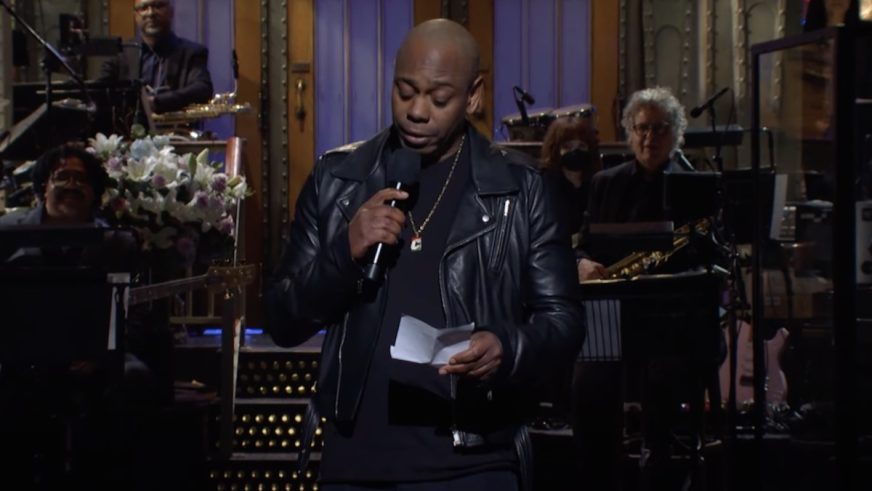 For the third time in the last decade, Dave Chappelle has been tapped Saturday Night Live to host a post-election episode. While he touched on the midterm election results, as well as pondering what the future holds for Donald Trump, the comedian focused most of his 15-minute monologue on Kanye West and the controversy surrounding his recent anti-Semitic comments.

“I’m giving up anti-Semitism in all its forms — and that, Kanye, is how you buy yourself some time,” Chappelle said in the opening of his monologue. “I’ve probably been doing this for 35 years, and at the beginning of my career I learned that there are two words in the English language that you shouldn’t say together in sequence, and they are: Jews.”

Chappelle noted how he had often defended West in the past, but this time “I wanted to see what would happen first”. He then pointed to Adidas’ cynicism about ending its cooperation with the West: “Adidas was founded by the Nazis, and they were offended.”

“It’s a big deal, [West] He violated the show’s business rules,” Chappelle continued, “you know, the rules of perception. If they’re black, that’s a gang. If they’re Italian, that’s a mob. If they are Jews, it is a coincidence, and you should never talk about it.”

However, Chappelle concluded his comments on West by noting that some of the rapper’s criticisms were not without merit. “I’ve been to Hollywood, that’s exactly what I saw. They’re a lot of Jews. Like a lot,” he said. “There are a lot of black people in Ferguson, Missouri, and it doesn’t mean they run the place. You might go out in Hollywood and you might start to draw some kind of lines and you might embrace the delusion that Jews run show business. It’s not crazy to think about it but it’s crazy to say it out loud.” .

Elsewhere in his monologue, Chappelle called Georgia Republican Senate candidate Hershel Walker “remarkably stupid,” and noted the irony of Donald Trump stealing classified documents from “work” — especially because he was notorious for never reading it during his tenure at Oval Office, praised Ukraine’s success on the battlefield against Russia.

Watch Chappelle’s full monologue below. Next month, Chappelle will team up with Chris Rock on a series of co-headlining tour dates (get tickets here).